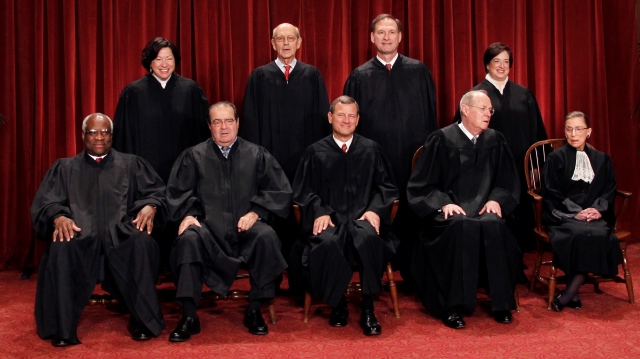 A lower court upheld GOP drawn redistricting in Alabama, but the Supreme Court ruled 5-4 that the Voting Rights Act can’t be used to justify maps that predominately group voters together based on their race.

Voter fraud isn’t limited to an individual voting twice because they wren’t ID’d at the polls, that type of voter fraud is actually less common than a UFO sighting.

A more common type of voter fraud is gerrymandering, or more commonly known as redistricting. This is when boundaries of voter maps are redrawn to favor a political party.

Alabama GOP tried to redistrict parts of Alabama using the Voting Rights Act in such a way that would have grouped together voters by race leading to favorable outcomes for the GOP.

This was the court’s second high-stakes decision in two years dealing with the Voting Rights Act and will likely have an affect on redistricting legal battles in states like Virginia and North Carolina.

Learn more about the decision here.

We look at different groups from political parities, to organizations, and try to compare the voter fraud accusations with the facts.

The Truth about ACORN Voter Fraud

ACORN (Association of Community Organizations for Reform Now) was an important . ACORN is a a group of community-based organizations that help low to moderate income individuals and families with voter registration among other services. Since their 1,200 groups and 500,000 members helped voters across America to register to vote it became a big target for the GOP.

Why Did the GOP Target ACORN?

The GOP went on the attack against ACORN during the 2008 elections, ultimately forcing Acorn into bankruptcy in 2010. But why did Republicans attack ACORN for voter fraud? Well, it’s a fact that the more people vote, the less likely Republicans are to win elections. You see low to middle income families are more likely to vote for a Democratic candidate do to the democratic idea of providing for all Americans instead of focusing on a system of trickle down wealth that Republicans champion.

Republicans believe that tax breaks for Americas wealthiest creates jobs. Unfortunately for those who listen to right wing Media they have been convinced that this is true. The truth is that Mom and Pop businesses with under 10 employees create the most jobs in the united states and the concept of trickle down economics has been long proven to create job loss, disenfranchise workers and to rack up the debt and deficit at alarming rates.

So one of the main Republican goals during election time is to accuse Democrats of voter fraud. In order to do this effectively the use half truths and rhetoric to attack institutions such as ACORN.

What Did ACORN do to Commit Voter Fraud?

Well the answer to the question, “Did ACORN commit voter fraud?”, is nothing really. You see Republicans brought hidden cameras to ACORN and attempted to commit voter fraud. These videos were falsified and edited to make it look like one member of the 500k members of ACORN suggested how to hide taxes.

This led to an organization that helped low to middle income individuals with healthcare, neighborhood safety, voter registration since 1970 with a clean record to file for bankruptcy. The Republicans got their way and came close to stealing the election because of it.

It’s time to find out who is behind this.

Who is Behind the ACORN Scandal?

It’s very easy to track down who is behind the ACORN voter fraud organizations. There are a select few Big Business backed organizations that push their agendas on the federal and state government by helping to spread talking points and draft up legislation such as the defund ACORN Act.

These individuals include Rupert Murdoch who owns fox news and the Koch Brothers who fund a group called ALEC. They don’t like the fact that ACORN uses government money to stand in the way of the Republican party. They know that when the Republicans aren’t in power then workers have more power and they pay more taxes so they go after these sorts of groups using Republicans who are placed in power by their money.

The Koch Brothers and Rupert Murdoch are behind a lot of the Voter Fraud Controversy in the United States. They stand to lose the most money and power if Republicans lose the election.

It’s a corrupt system that has led to a grass roots organization with no history of voter fraud to go bankrupt. Many chapters still exist but it will never be the same. Did you support the ACORN voter fraud scandal. Now that you know the facts perhaps next time democrats are accused of voter fraud you’ll stand up for the American people and stop helping Big Business fight against your interests.

Learn more about ACORN and voter fraud from ballotpedia.

Why Republicans Focus on Voter Fraud in the US

Republicans tend to believe that individual voter fraud is a problem and favor restrictive voter laws, such as voter ID laws.

If individual voter fraud isn’t an issue then why does the GOP insist that it is. The answer is twofold:

1. People who have issues getting their vote cast do to mobility, identification, work schedules and economic standing are disproportionately voters who will vote for the Democratic party.

2. A basic manipulation tactic is to accuse your opponent of the exact thing that you are doing, so when you get accused of that thing yourself it doesn’t seem that drastic.

Republicans know that when everyone votes they lose. In fact the less people who vote the higher chances they have of winning. The Republican party may not have the numbers, but they most certainly have the money. A large majority of money from Big Business is funneled to Republican candidates in order to ensure victory, which obviously gives them sway with our government. Given the hundreds of millions of dollars spent each year on the Republican party it is in the interest of many of Americas most powerful to ensure that the vote goes to the Republicans. Yet as mentioned before this can only be accomplished through a few means and one of the most important is the vote.

The Republican election strategy is involves smearing the competition, accusing them of voter fraud and then using groups the disenfranchise voters.

Big Business funnels hundreds of millions of dollars to groups who’s main purpose it is to seek out voter fraud in swing states. These groups scour the records to find “illegal” voters. These include dead voters, voters trying to vote twice and voters with fraudulent addresses. They claim 24 million illegal voters in the US, although the actual number is closer to zero.

The Republican Statistics on Voter Fraud

So the facts say voter fraud doesn’t exist on an individual level, while Republicans say it happens in the tens of millions. Where do they get these numbers.

Where Republicans Get Their Facts

Republicans inflate numbers based on semantics. They use things like people with the same birthday and same name in the same state (the odds of two “John Smiths” born on “1/1/50″ in Florida is statistically common for instance), individuals who are on the poll list but are since deceased (these people don’t have to vote for the GOP to consider them frauds…. They can’t vote, they are dead), among other twisted facts.

The chances of the headline, “Republicans Steal the Election”, is something that happened before and something that could very likely happen again. Less than 600 votes put Bush in office in 2004 and in 2001 it seemed Bush stole the election from Al Gore. In both cases his brother controlled the voting machines in Florida. This election Tagg Romney founded a Hedge fund called Solamere Capital and is a financial partner with HIG Capital who invests in Hart Intercivic, a polling machine company that operates machines at polling places in Hamilton County, Ohio. Republicans will tell you that left wing communists are blowing this story out of proportion. This is the same type of disinformation and Republican tactics that allowed Republicans to steal elections before. Don’t be fooled.

Republican Voter Fraud is a big issue in the United States and is seriously discrediting our democracy. If Republicans win the election they will continue to work for the interests of Big Business and our country will continue to privatize programs that benefit the 99% and our debt and deficit will continue to grow. Stand up to Republican voter fraud by casting your vote.