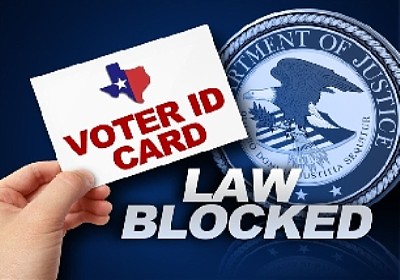 On Wednesday, Aug. 5th the 5th Circuit of the US Court of Appeals struck down major portions of the Texas Voter ID law for violating the Voting Rights Act.

While the ruling was a win for opponents to the Voter ID laws, the three judges unanimously disagreed with the lower courts assertion that it amounted to a “poll tax”. Instead, they simply recognized that the number of elderly, women, and poor (who are disproportionately minority) voters that are disenfranchised by the law is  an unacceptable sacrifice and amounts to discrimination.

Next, the Court will judge whether this was an intentional move on the part of the law-makers.

Facts About Those Disenfranchised by the Texas Voter ID Law 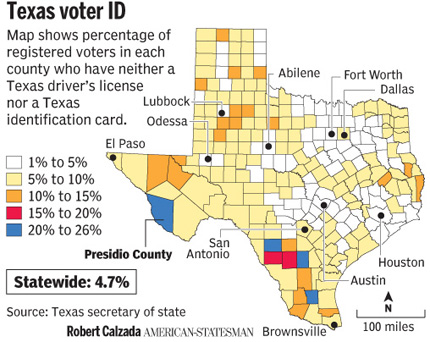 Around 600,000 registered Texas voters don’t have one of the limited forms of ID that the law allows, according to evidence presented in the legal challenge to the law, which was brought by civil rights groups and the Justice Department… Texas has been able to point to just two fraudulent votes since 2000 that would have been prevented by the ID law. MSNBC

The law itself did not single out minority groups, the elderly, or the poor. The implications, however, disproportionately affected these groups.

This is a big step forward in righting the wrong of these strict Voter ID laws. Many states still have these discriminatory types of Voter ID laws still in play, but hopefully this is a step forward. Greg Abbott has vowed to continue to beat this dead horse in Texas, but now has few avenues left for making it happen. Ultimately, these laws are ineffective at dealing with the majority of cases of actual voter fraud and the sooner their supporters stop wasting time defending them, the faster we can move forward towards legislation that empowers eligible voters to participate. Because voter fraud is actually extremely rare, better eligible voter turnout might be the best way to thwart it.

Get the Facts on Voter ID:

Get the facts on Voter ID laws to find out if voter ID a form of voter suppression, or if individual in-person voter fraud a problem in the US?

The new voter ID laws will have a significant impact on Florida. It’s a fact that many voters hindered by the new voter ID laws are likely to vote for President Obama. Since many of these voters will not vote due to the strict voter ID requirements this swing state is in danger of casting a skewed vote in election.

Florida in 2001 and Voter Fraud

Remember 2001 when George Bush beat Al Gore. Many people blamed the voting process on the narrow victory, the key battleground state in question in this election was Florida. We need to stand up for democracy and that means giving everyone a fair opportunity to cast their vote as American citizens. This is even more important in Battle Ground states like Florida where the voter ID laws make their biggest impact.

If the elector fails to furnish the required identification, the elector shall be allowed to vote a provisional ballot. The canvassing board shall determine the validity of the ballot by determining whether the elector is entitled to vote at the precinct where the ballot was cast and that the elector had not already cast a ballot in the election.

Florida uses signature matching: the voter signs the provisional ballot envelope. That signature is compared to the signature in the voter registration records. If they match, the ballot is counted.

Florida will be a key state moving forward. Help prevent voter fraud the right way and fight back against the current voter ID laws if think that they are unfair. Remember the actually counts of voter ID fraud have been few and far between, many seniors, students and those struggling to get by will not cast their vote due to the current voter ID laws in Florida. Don’t stand back and let injustice continue if you believe the new laws are wrong.

Each elector shall present proper identification to a poll worker at or prior to completion of a voter’s certificate at any polling place and prior to such person’s admission to the enclosed space at such polling place.

A voter who desires to vote an official ballot at an election shall provide proof of identification.

A voter who votes in person at a precinct polling place that is located at a state licensed care facility where the voter resides is not required to provide proof of identification before voting in an election.

Specific forms of ID are not listed in statute. ID must be issued by the state of Indiana or the U.S. government and must show the following:

Each person desiring to vote shall provide a valid form of identification. The following are exempted from the ID requirement:

The following forms of identification are valid if they contain the name and photograph of the voter and have not expired. Expired documents are valid if the bearer is aged 65 or older.

A voter who is unable or refuses to provide current and valid identification may vote a provisional ballot.

In order to have his or her ballot counted, the voter must provide a valid form of identification to the county election officer in person or provide a copy by mail or electronic means before the meeting of the county board of canvassers.

An elector who votes in person in a primary or general election shall present government-issued photo identification before being allowed to vote. Voters who live and vote in a state-licensed care facility are exempt.

An individual without ID can cast an affidavit ballot which will be counted if the individual returns to the appropriate circuit clerk within five days after the election and shows government-issued photo ID.

Voters with a religious objection to being photographed may vote an affidavit ballot, which will be counted if the voter returns to the appropriate circuit clerk within five days after the election and executes an affidavit that the religious exemption applies.

The new voter ID laws in New Hampshire could turn this battleground state into a win for republicans. New Hampshire is historically very independent, this means their vote could go either way. Since voter fraud has never been much of a problem in New Hampshire it is strange that they would vote to make Voter ID laws more strict. Don’t stand by and let Republicans take the vote. If you believe that these votes are wrong organize and help citizens get their voter IDs.

Beginning September 1, 2013, the following IDs will be accepted if the name on the ID is substantially similar to that on the voter registration record and the expiration date does not exceed five years:

A person’s identity may be verified by a moderator or supervisor of the checklist or the town or city clerk, but if any person authorized to challenge a voter under RSA 659:27 objects to such verification, the voter shall be required to execute a challenged voter affidavit.

If a voter does not have a valid photo identification, the ballot clerk shall inform the voter that he or she may execute a qualified voter affidavit. The voter may then cast a regular ballot.

Within 60 days after the election, the secretary of state is required to mail a non-forwardable letter to each voter who executed a qualified voter affidavit, notifying the person that a person who did not present valid photo identification voted using his or her name and address and instruct the person to return the letter within 90 days with a written confirmation that the person voted or to contact the attorney general immediately if he or she did not vote. Any such letters returned as undeliverable must be turned over to the attorney general, who shall investigate for voter fraud. Notice from any voter receiving such a letter that s/he did not vote is also forwarded to the attorney general for investigation. The secretary must also turn over to the attorney general a list of all voters who fail to respond to the letter to confirm that they voted.

Doing Your Part With Voter ID in New Hampshire

The new voter ID laws in New Hampshire could turn this battleground state into a Republican victory due to Democratic Party voters not being able to get a valid ID with which to vote with. Do your part to get the word out about the voter ID laws and ensure everyone has a vote.

All voters must provide to election officials at the polling place on the day of an election proof of the voter’s identity. Also applies to voters requesting and voting an absentee ballot.

Voters who cast a provisional ballot because they did not provide acceptable proof of identity must appear in person at the board of elections to provide such proof within the 10 days immediately following Election Day. (see the Ohio Secretary of State’s FAQ on provisional voting)