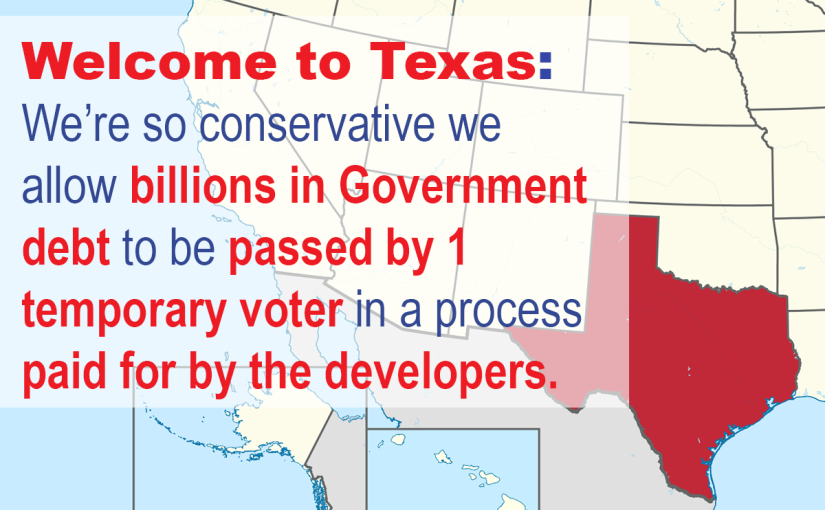 When a developer in Texas wants to avoid the cost of doing business they simply hire a company to provide voters to ‘pass’ the cost onto future residents.

Voter fraud and election fraud isn’t just one thing. It comes in a variety of shapes and sizes. By definition, however, all types of voter fraud come with an intent to corrupt the election process. In this particular situation, it involves developers paying a company, Stingray Services, to provide voters-on-demand to vote for the creation of Municipal Utilities Districts (MUDs) before any residents actually live there, as well as, voting for various Government bonds (debt) that all work in the financial favor of the developers. This Government debt is then passed on to future residents.

Now creating new neighborhoods and the zoning and elections process that go along with that is complicated. So lets start by looking at what the process usually looks like.

What Most Developers Do

When a developer wants to build a new neighborhood, there is a lot of upfront expenses for expanding infrastructure like roads, utility lines, and potentially (but not typically) school buildings, public parks, and pools. The rules are slightly different depending on which state, county, or city the development is happening in, but there are a variety of ways developers go about handling these costs:

Using these kinds of processes is important and ensures that development does not turn into sprawl, which can have a devastating impact on the environment. It also helps prevent unnecessary or unwanted excess Government (tax-payer funded) spending on development.

What Shady Texas Developers Do

Some developers in Texas have found an election loophole that allows them to bypass the investment costs of developing infrastructure without having to seek the support of current local residents in the surrounding area. Here’s what they are doing:

MUDs were initially intended to focus on ensuring waste and potable water management, as well as, water shed protection along shorelines and providing smaller communities with funding for fire and emergency services. However, it has since then morphed into an entity for wasteful spending, growing at an alarming rate (much faster than the population or inflation). At this point, this process is leaving the decisions regarding billions of dollars of Government spending in the hands of only 1 or 2 individuals who don’t intend to live in the area long-term. It favors shady developers willing to pay for rigged elections in order to usurp the normal legal processes for developing new communities. In addition, current residents of these areas are left out-of-the-loop on important decisions happening right next door.

As mentioned in the abc13 news video above, apparently this type of election fraud is legal in Texas. Stingray Services is so confident in the legality of their services that they don’t even try to hide what they are doing. They even proudly list off the corrupt developers who have used their services “including Lennar, Toll Brothers, Friendswood, Land Tejas, Taylor Morrison, Pate Engineers, Brown & Gay.”

At this point, the powers that be in Texas seem unwilling to call this for what it so obviously is: vote buying and electorate manipulation. When asked about this case the Secretary of State stated, “it is up to the voter to determine their place of residency for voting.”

This seems odd considering the Woodlands RUD case we covered in June, where several concerned civic-minded citizens were charged and convicted of Voter Fraud after changing their residence to vote in another utilities district (a Roads Utilities District) election in Texas. One of those convictions has since been overturned in a higher court and three others are still awaiting their appeals.

This case, like the Woodlands RUD case from Texas, has left me with more questions than answers. The voter bribery and election corruption is so obvious that I am finding it difficult to understand how it has been allowed to continue. Elected officials in Texas vilified civic minded activists who used the same voter residence logic trying to stop utilities district corruption are now using it to legitimize utilities district election corruption in another.

Secretary of State stated, “it is up to the voter to determine their place of residency for voting.”

Is the Secretary of State willing to speak those same words to the Jury at Jim Jenkins’ retrial? Or to the Judge deciding the validity of Adrian Heath’s Appeal? Or the two others involved whose cases are also waiting appeal?

Last question: When is Texas going to put a stop to the fraudulent utilities district elections and the Government spending madness?