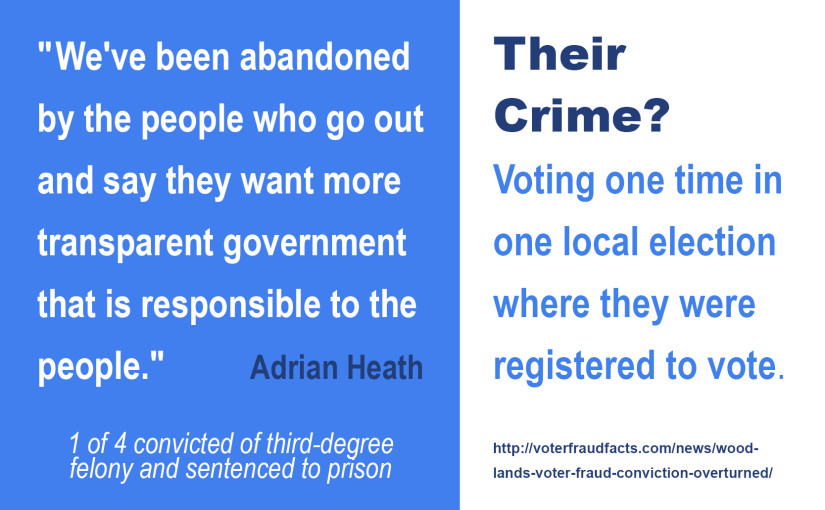 James Alan Jenkins’s voter fraud conviction was overturned by the Texas 14th Court of Appeals due to the Jury not being instructed in mistake of law.

The Judge in the first trial refused to instruct the Jury that Jenkins had sought counsel from state officials in Texas and reasonably believed his actions were legal, including a key recorded phone call from a state official. The Judge also refused to instruct the Jury about the mistake of law defense. Three others were also convicted for voter fraud relating to this case and they are also appealing their convictions. This decision gives hope that the others will also be granted retrials.

The Facts About The Woodlands Voter Fraud Case

This may be by far the most confusing voter fraud case ever encountered. It involves a utilities district with very few registered voters because there are no residential zones in this district, the district has representatives that ran unopposed for 8 years, and when their positions are challenged arrests are made. Sounds a bit shady, so lets take a closer look.

The Woodlands, Tx is in Mongomery County and is 28 miles north of Houston with a population just over 100,000.

How Did Jenkins Become Involved with The Woodlands RUD #1?

Heath was concerned about the fact that the representatives on the board are not held accountable to the residents of the city and “Heath believed that the RUD’s board acted primarily to benefit The Woodlands Development Company.”

He did extensive research and had correspondence with local and state officials, including email correspondence with attorney Mike Page who deals with “public finance and local government law, including representation of municipal utility districts“. He discovered that three of the five positions for The Woodlands RUD #1 representatives were set to expire in 2010, and thus were up for election. This spurred more researched into legal avenues for being elected to these positions and the process of attaining residency in The Woodland’s RUD #1 for the purpose of voting.

In 2009, he gathered together a group of his friends, including Jenkins, and gave a presentation to raise awareness about The Woodlands RUD #1, their indebtedness, and to encourage his friends to run for positions on the board. The ultimate goal being to be elected and to use the positions to dissolve the district altogether.

The Mistake of Law Defense

In June of 2013, Jenkins was convicted of voter fraud and sentenced to 3 years in prison for voting in a 2010 election for The Woodlands Road Utility District #1 (RUD). In June of 2015, this conviction was overturned because the Jury was not counseled that they had the option to find Jenkins not guilty based on mistake of law. They were also denied testimony that Jenkins sought counsel from Texas state officials prior to changing their voter registration address.

A mistake of law defense generally argues that a person is not guilty of violating law because he/she did not understand how the law applied to them. It typically requires that the defendant made an effort to understand the law and how it applied to them, but there have been cases in which it was used as a defense because a law had changed just prior to the offense.

Understanding the key issues about this case leaves more questions than answers. How was Jenkins even indicted if there is no law calling his actions illegal? Who exactly are these Board of Directors “representing”? Is there any  way for citizens of The Woodlands to participate in the elections for these director’s positions when there are no residential zones within the district? Why are these people being treated like violent criminals for attempting to legally participate in an election process which has an affect on them and their community?

It appears that Jenkins and his friends found a legal loophole to participate in an election which, for 8 years, went uncontested because of legal loopholes. A loophole that has been repeatedly exploited by developers in Montgomery County who hire “Rent-a-Voter” services to move voters into areas with no voters for the purpose of voting on Bonds to pay the developers. Despite this, Jenkins and three others were convicted of third-degree felony charges for illegal voting and sentenced to prison. It also appears that The Woodlands RUD #1 boundaries were placed specifically to keep voters from participating in the election process and that the “elected” representatives of the district used the legal system to commit election fraud in order to maintain their positions of power.

Other shady facts about this case include: a law firm that has represented both the incumbents and also The Woodlands Development Company (the primary company receiving money from the RUD bonds), campaign contributions for political officials intent on prosecuting Jenkins and his friends which came from both The Woodlands Development Company and the law firm. Additionally, a sworn affidavit from Jim Doyle who spoke with Tommy Williams about the case where Williams acknowledge that he would “influence Attorney General Greg Abbot to prosecute [them]” was not allowed as evidence in these individuals cases.

Luckily for Jenkins, the Judge overturned the conviction and sent the case for retrial. Unfortunately, Jenkins’s fate still hangs in the balance and The Woodlands RUD #1 continues to create more local government debt to pay the contractors of their choosing unchallenged and without constituents to hold them accountable.